This is a late microvascular complication of diabetes mellitus which typically appears after more than 20 years of type I diabetes. Most patients with diabetic nephropathy already have diabetic retinopathy, and many also have evidence of neuropathy. In type II diabetes it is common for subclinical diabetes to have been present for many years, so that complications may be identified at the time of diagnosis. 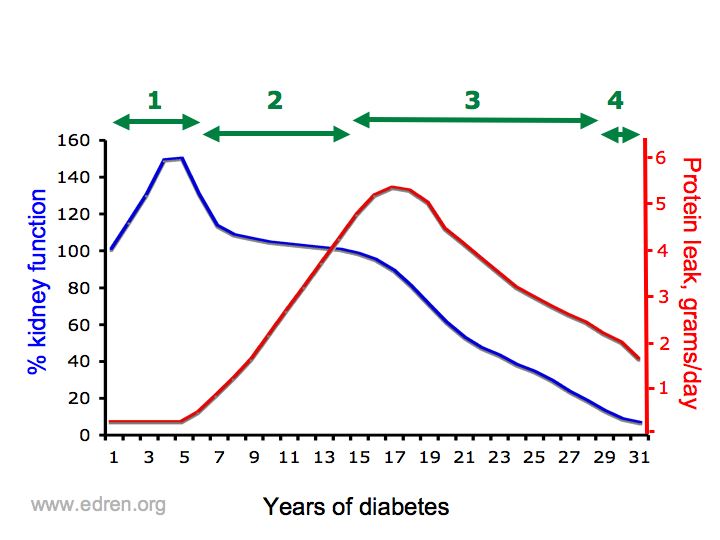 Not everyone gets diabetic nephropathy – about a third of patients do eventually, but there are risk factors

Other types of renal disease can occur in diabetes, but in the presence of other complications and with the characteristic progression, the etiology can usually be safely assumed. If there are atypical features then renal biopsy may be considered.

The mortality of diabetics with ESRF is substantially higher than averages for other patients with ESRF, particularly because of the high incidence of other diabetic complications, notably accelerated atherosclerosis. Difficulties with fluid balance, and gastrointestinal symptoms aggravated by autonomic neuropathy, commonly lead to earlier institution of dialysis in diabetics than in other patients.
Systemic diseases such as diabetes were once considered to be contraindications to renal replacement therapies. Diabetics with many complications may still have a difficult time on dialysis, because of ischaemic limbs, ischaemic heart disease, or autonomic neuropathy, or a combination of these.