BK and JC are two polyoma viruses that are not associated with symptomatic infection in immunocompetent individuals, but are commonly acquired and lie dormant. They may  cause significant disease in immunosuppressed patients. JC virus has only very rarely been reported to cause renal disease, and the brain disease that it can cause is extremely rare in renal patients. Kidney infection by BK virus is a well recognised problem though. Published evidence of BK nephropathy is almost completely limited to renal transplantation.

BK virus (BKV) infects more than 80% of individuals by early childhood, and persists in epithelium of kidney, ureters and bladder. Viruria is common following renal transplantation, and testing for this is not helpful. Viraemia is less common, and sometimes (not always) associated with nephritis.

BKV associated nephropathy (BKVAN) is a tubulointerstitial nephritis that has often been mistaken for rejection, and carries a high risk of graft failure. There generally are no extra-renal symptoms, signs, or test characteristics to suggest viral infection. The risk of BKVAN is highest in the first year after transplant, but is raised for up to 5 years. Occasionally it occurs later.

BKVAN is almost always associated with significant viraemia, making screening by PCR of blood potentially useful. Our protocol is to screen:

Diagnosis of BKVAN usually requires a renal biopsy. Some centres use urine cytology to identify virally infected cells. Infected cells can be identified microscopically, but immunostaining for polyoma antigens is much more sensitive.

A biopsy may not be necessary if:

Reduction in immunosuppression is the cornerstone of BKV management. However there is no clear consensus on the viral load above which therapy should be altered. 10,000 copies/ ml is a possible reference point, but as assays are generally not standardised, this can only be considered a rough guide.

The most robust data supports initially reducing or stoppping the antimetabolite (generally MMF), with later reductions in tacrolimus if viraemia or nephropathy persists. Other options include switching tacrolimus for cyclosporine or even sirolimus.

After viral clearance – many practitioners see BK viraemia as a sign of over-immunosuppression and do not routinely return to previous dose of anti-metabolite. It may be necessary to balance this with perceived immunological risk, monitoring viral load.

This protocol has been used in Edinburgh, though use of alternative therapies is now rare (see below): 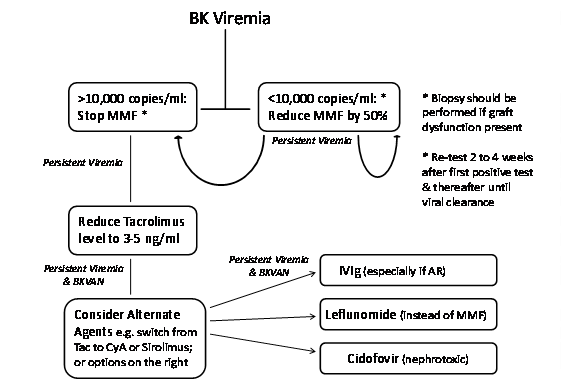 These are all unproven and generally not indicated.

Difficult to be sure of, as histological appearances cannot easily distinguish the unless the rejection is antibody-mediated, in which case IVIG has been used.

Retransplantation after graft loss from BKVAN has generally been successful. Be sure viraemia is cleared.

Page by [?], modified from a 2015 appendix. Last modified date shown in footer.