This page describes some blood tests that are commonly used in patients with kidney diseases, or to measure kidney function in people who may have kidney disease.

Tests for how well are my kidneys working?

Creatinine – Creatinine is the best routine blood test for measuring how well kidneys are working. It is a waste product produced by muscles and put out through the kidneys. This means that ‘normal’ levels depend on how much muscle you have, and this can cause some problems in spotting kidney disease.

Because of the problem of differing amounts of muscle in different people, most labs now also report an estimated GFR (eGFR) with creatinine measurements, and this can be very useful – see below.

Big changes in creatinine are likely to be important, whatever the creatinine level. However different labs may give significantly different results for the same creatinine sample, because there are different ways of doing the test.

Normal blood creatinine is 60-120 micromol/litre (0.7-1.4mg/dl) – but see the cartoon above for a caution about this that applies particularly to small, disabled, or elderly people. In many people, ‘normal’ creatinine can sometimes conceal 50% loss of kidney function.

Urea – Urea is a small molecule that is produced in the liver from protein that you have eaten. It is normally put out by the kidneys, so blood levels rise as kidneys fail. However other things change the level of urea in your blood too, so that it is not a simple guide to kidney function. Here are some of the things:

Urea is still a very useful test when used together with creatinine. It can also be used to measure how well dialysis is working to clear waste products (see Is my dialysis good enough?).

GFR is a test of how much the kidneys are filtering. It is normally about 100 mls/minute. This means that the kidneys are removing all the creatinine found in 100mls of blood every minute – almost 150 litres per day! Most of this 150 litres is absorbed back into the body, so that only 1-2% of the filtrate appears as urine. Creatinine clearance (see above) gives quite a good measure of GFR, but requires a 24 hour urine collection for measurement. Two other ways of measuring GFR are:

Knowing your GFR is very useful. It can give you an approximate % kidney function, and be used to show your CKD stage – more info about low GFR and CKD stages.

If you are interested in calculating your own eGFR, you can try these links. You need to know your creatinine. 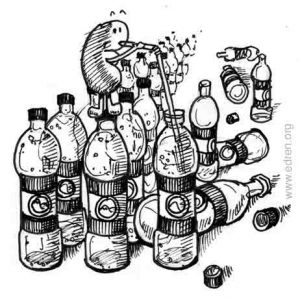 Normal kidneys filter 150 litres per day. That’s 100 mls per minute. It also adds up to 33 Imperial gallons, 40 US gallons per day. Cartoon by Beth Shortt.

Tests of other things the kidney puts out

Sodium (Na) Sodium comes from salt, which is sodium chloride. Although there is often too much of it in your body when your kidneys don’t work properly, its level in the blood does not change much. This is probably because sodium makes you thirsty, so you drink more until the level is normal again. Having too much sodium in the body causes high blood pressure, oedema (swelling), and eventually severe problems such as heart failure and fluid on the lungs (pulmonary oedema). Removing sodium is an important part of dialysis treatment. Diuretic drugs (e.g. furosemide) increase the sodium put out by the kidney. Most people with kidney disease need to keep down the amount of salt in their food.  In the western world we add too much salt to food and in prepation of food. Too much salt is said to increase blood pressure by as much as 10/5, for example140/85 to 130/80, but the effects get worse if kidney function is reduced.

Potassium (K) – Potassium comes from food, especially fruit, vegetables and nuts. Extra potassium you eat is normally put out in urine, so its levels in blood may rise in kidney failure. Blood potassium is normally precisely controlled and important. High levels can be very dangerous as they can cause serious heart rhythm abnormalities, including cardiac arrest, even before you have any other symptoms from it.

How high is dangerous?

There isn’t a simple danger level, but levels above 6.0 causes concern, and levels much above 6.5 are dangerous. Levels above 7.0 are certainly dangerous.

Treatments for dangerously high potassium may include giving sugar (glucose) and insulin, and some other measures. If it is very high and kidney function is poor, dialysis may be necessary.

Calcium (Ca) – The body’s calcium is mostly in bones, but in kidney failure there are problems with calcium and bones. Low levels of calcium may lead to thinning of bones, very low levels lead to weakness, tingling, and other problems. High levels cause sickness. It is measured regularly in patients with kidney diseases because:

Phosphate (PO4) – Phosphate levels are high in kidney failure. If not controlled, this causes

More information about control of phosphate by diet and drugs

Parathyroid hormone (PTH) – Parathyroid hormone is measured from time to time in patients with kidney diseases to prevent renal bone disease (renal osteodystrophy; read more information about renal bone disease). After years of kidney failure, PTH levels often rise, causing calcium to be removed from bone and blood calcium levels to be high.  Normal levels of PTH are different when measured in different labs. In kidney disease it may not be best to keep PTH levels completely normal – some guidelines suggest just keeping it less than 2 or 3 times the normal level at 150-300 mg/L.  This is best done by controlling blood phosphate levels (see above) or by taking vitamin D supplements such as altacalcidol.  If PTH levels cannot be controlled by these measures alone then parathyroid glands may need to be removed in an operation called parahyrodiectomy.  There are 4 parathyroid glands, all located in the neck, behind the thyroid gland.

Haemoglobin (Hb) – The stuff in red blood cells that carries oxygen. Too little is anaemia. Most patients with severe kidney failure are anaemic.

White blood cell count (wbc) White blood cells fight infection. Levels are often high during infections, but may be made low by some drugs, such as those used to lower the immune system (e.g., azathioprine, mycophenolate, cyclophosphamide) and sometimes also by infections. If the numbers are very low there is an increased risk of serious infection. Different kinds of white blood cell are added together to get the wbc. Neutrophils are the type that is most important for fighting common infections, and they are particularly likely to be affected by drugs.

Platelets (plats) – Platelets are needed to form blood clots. If the numbers are very low (below 50) the risk of serious bleeding increases. Patients with kidney disease quite often have slightly low platelet counts, but other diseases, and drugs, may also cause low platelet counts.

Albumin (Alb) – Albumin is a blood protein. It usually makes up more than half of the protein in blood.  Low levels can contribute to ankle swelling.  Some things that may cause low levels include:

In dialysis patients it has been found that low albumin levels can be a marker for not doing well on dialysis. Unfortunately different methods used to measure albumin mean that different labs can get quite different results for the same samples from patients with kidney diseases.

Is my dialysis good enough?

Either of two tests may be used to measure how much haemodialysis you get. These tests aren’t the only things that are important though. It is also important to have long enough dialysis to get fluid balance right, and to correct some other chemicals, such as Phosphate.

Urea Reduction Ratio (URR) – This is a measure of how much waste products such as urea have been reduced by one haemodialysis treatment. It is used to check that enough haemodialysis is being given. If it is too low more than once, you should find out why.

Kt/V – This is a more complicated test of how good dialysis is. URR is a simpler test. Kt/V includes more than just the change in urea. If it is too low more than once, you should find out why.

Ciclosporin, Tacrolimus and Sirolimus are drugs that are used to prevent your immune system from rejecting your transplant. They all need blood tests to make sure that you are taking enough, but not too much. Too much may cause serious side effects, while too little may not prevent rejection. The exact levels you are aiming for depend on a number of things, for instance:

– so we have not given a target range here. If you want to know, you should ask your transplant team what your target levels are.

Tacrolimus and ciclosporin are sometimes used to reduce urinary protein leak in patients with nephrotic syndrome.

PatientView has links to detailed information about all the tests it shows.

Acknowledgements:  The authors of this page were Neil Turner, IA Ihmoda & Bryan Conway . It was first published in June 2004 and reviewed in May 2010 by Heather Kerr. The date is was last modified is shown in the footer.