Haemodialysis in Edinburgh I

Active conservative treatment of patients with severe uraemia was started in the early 1950s before dialysis was available by Drs J.S. Robson and C.P. Stewart (RIE clinical biochemist) and their team, who worked in the Department of Therapeutics at the RIE, had interests in endocrine disease and metabolic medicine. Their research interests were in fluid and electrolyte problems, including those that are related to renal function, adrenal and pituitary function. Work was carried out in Professor Derrick Dunlop’s metabolic ward. Patients with renal failure were put onto a low protein, low salt, low potassium and high calorie diet that was said to enable the patient to survive while the kidneys recovered from ‘acute urinary suppression’ (acute tubular necrosis). While this treatment was undoubtedly an advance, there were many patients who did not survive it. More info

Reports of success with dialysis began to spread during the 1950s, and there was a growing interest in renal medicine. Previously fit healthy men who had the ability to get through an acute illness needed something else to support them while their kidneys failed. The use of dialysis during the Korean War (1950-1953) helped to establish its place. By the early 1960s, dialysis for patients with acute renal failure was becoming established in Western countries.

At about the same time, knowledge of renal diseases was being helped by the introduction of techniques for renal biopsy (being able to sample the kidney and look at it under the microscope). This was first introduced in Edinburgh in 1956. The first renal biopsy in the world was performed in 1901, but the first percutaneous needle renal biopsy was performed by Ball in 1934. It required a pathologist with specialised knowledge in kidney tissue. Dr Mary MacDonald was in charge of the pathology side of renal biopsy at the time. Nephrology was growing as a discipline.

Haemodialysis in Edinburgh: How it all began

In 1958, Dr Rae Gilchrist (consultant cardiologist at the Royal Infirmary of Edinburgh) was impressed by Professor Nils Alwall’s work after attending a conference in Sweden. Dr Gilchrist suggested that an artificial kidney should be installed in the RIE. It was noted in the Minute of Meeting of the Medical Committee (24/3/1958) that “the Committee agreed to recommend that the action taken in this matter be homologated” after hearing a report by Dr Gilchrist on the desirability of having an Artificial Kidney Unit at the Royal Infirmary of Edinburgh (RIE) (Minutes of the board of management and committees, RIE, No. 8, 1958).

It had been stated in the Memorandum regarding the Artificial Kidney for the RIE (March 1958) that an artificial kidney in RIE could be used to treat cases of poisoning and for the treatment of surgical patients, obstetrical patients and medical patients who develop acute renal failure. There had been 34 deaths in 1957 in the RIE due to conditions where the value of an artificial kidney had been established, including 7 cases of poisoning, 18 surgical cases, 6 medical cases and 3 obstetrical cases, illustrating the need and potential benefits of possessing an artificial kidney, justifying the proposal for its purchase. In 1958, It was estimated that a Kolff-Travenol Twin Coil Kidney would cost US$ 1538, and 100 disposable coil kidneys would cost US$ 5900.

The decision to purchase a Kolff-Travenol artificial kidney for Edinburgh was made due to its advantages over the Kolff-Brigham machine.

The first artificial kidney in Edinburgh

In the progress report of the Works and Buildings Committee in May 1959, “the partitioning, the new ceiling, lighting, jointless flooring, sanitary and other fittings had been completed, or were nearing completion, and painting work was in hand. Every effort was made to have the unit finished by May 20th.” (Minute of Meeting of the Works and Buildings Committee, 19/5/1959, book no 9).

The Artificial Kidney Unit was opened on 20 May 1959 by the Earl of Wemyss, then Lord High Commissioner to the General Assembly of the Church of Scotland, accompanied by a member of his Bodyguard of Archers. He regretted that it was not possible to fill the 100-litre tank of the artificial kidney with champagne to mark the occasion! (Lambie AT, 1990). 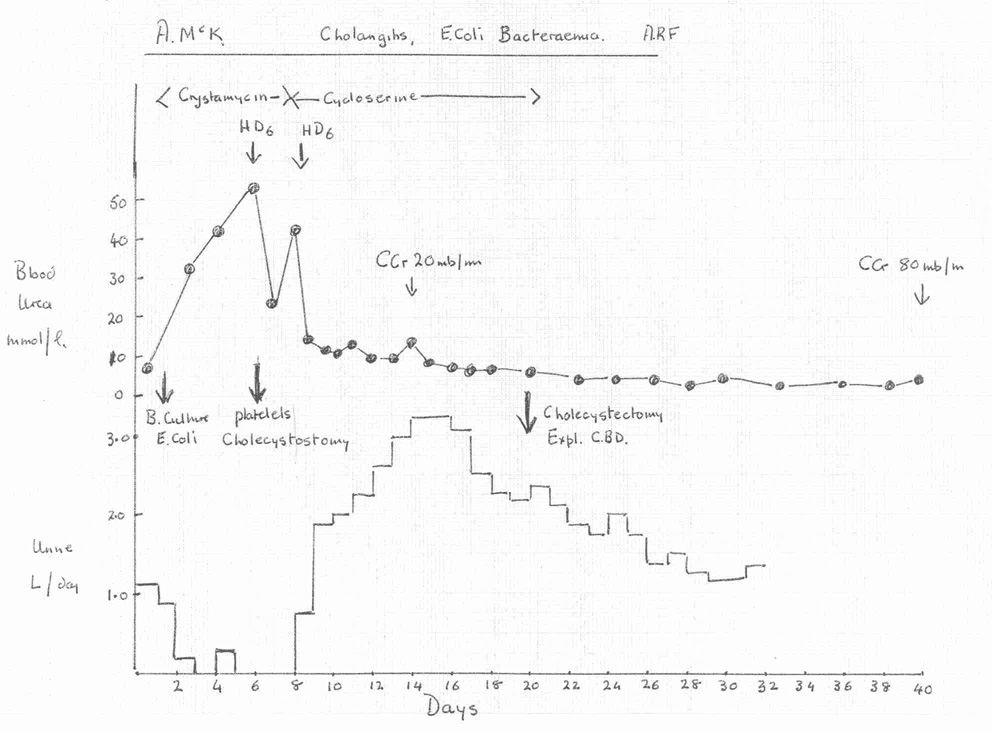 The first patient was dialysed 2 days after the opening of the AKU in May 1959. A young man presented with biliary sepsis, Escherichia coli septicaemia, oliguria and uraemia, who was unfit for the necessary surgery (Lambie AT, 1990). He was dialysed, and biliary drainage was subsequently performed. He made an excellent recovery, illustrating in thischart (contemporary chart provided by Dr A Lambie).

The AKU received patients referred from many parts of Scotland, even the Orkney Isles. Haemodialysis in those days was lengthy, often taking up to 6 hours in the cases of uraemic patients, and 8 hours in poisoned patients. Dialysis often took place at night when severely uraemic patients who came from a distance were admitted late in the day.

A considerable amount of the doctors’ time was taken away from other clinical duties. The need for more frequent, shorter dialysis for patients with acute renal failure (ARF) could not be met until a team of nurses was specially trained in the mid-1960s primarily to look after patients suffering from chronic renal failure (CRF) who required dialysis. Infrequent vigorous dialysis was gradually phased out. More frequent and better-monitored dialysis was possible from 1966 onwards. Blood urea levels were maintained at a lower level due to frequent dialysis. Patients’ diets improved as frequent dialysis imposed fewer restrictions on the diet. This allowed better nutrition, both orally or parenterally. The policy of using short frequent dialyses in Edinburgh was not adopted in all the dialysis units across UK.

The Kolff twin coil artificial kidney was kept in use in Edinburgh till the late 1980s despite being a labour-intensive operation, since the bicarbonate buffer was more suitable for patients with acute renal failure and also produced less changes in blood pressure.

Outcome for patients with acute renal failure treated by haemodialysis

Haemodialysis gave very exciting prospects, as the mortality from severe ARF had previously been almost 100%. As it was a relatively new procedure, the outcome and possible complications were not clear. As a result, patients were only dialysed if their chance of dying due to uraemia was greater than the possible risks of haemodialysis. It was thought that there was a point in the natural history of ARF at which the patient appears to “pass beyond the limit of no return”. (Robson JS, 1961). In Professor Robson’s experience, serious prognostic signs at the time included focal or generalised neurological features and severe acidosis. This meant that the ideal time for dialysis had past.

In the early days, patients with a blood urea of over 300 mg % (i.e. 35.7 mmol/L) would be dialysed for 6 hours, producing a big change in the blood biochemistry, which was thought to be desirable. Subsequent research in Edinburgh, Glasgow and London showed that large gradients of hydrogen ions, bicarbonate ions and urea developed across the blood brain barrier after such dialyses (Lambie et al, 1965). The hydrogen ion concentration in the cerebrospinal fluid rose in some cases where large changes had been made in the concentration of bicarbonate in the extra-cellular fluid and the patient became hyperpnoeic. This state of disequilibrium was associated with clinical deterioration. The consideration of purchasing a more powerful rotating drum artificial kidney, which could produce even larger changes in the composition of the extra-cellular fluid in a short time, was therefore ruled out.

The cost of dialysis

Patients with acute renal failure were often very susceptible to cross-infection; nursing in isolation was thought to be beneficial. Initially this was carried out in a room in the Clinical Laboratory which had previously been used to see out-patients. Subsequently the Renal Isolation Unit was constructed. It was reported in 1962 (1961-62 RIE annual report) that wards 23 & 24 had been completely renovated and modernised and an isolation unit (later known as 21A) for the artificial kidney patients incorporated in ward 23. This was made possible when Sister Kate Anderson vacated her residential suite on the ward 23 corridor. The report noted that ” Ward 21, which has for some years been used to accommodate the patients from the artificial kidney unit will now be able to revert to its proper function as a metabolic ward.” The suite of rooms was designed in collaboration with Dr John Bowie, the hospital bacteriologist, to protect against infection. These rooms were later to be used for a variety of procedures including that of housing patients with bone marrow transplants.

After 1962 dialysis for patients with ARF was carried out in the Renal Isolation Unit (RIU). There were 4 dialysis beds in 4 small ventilated rooms. To prevent cross-infection, reverse-barrier nursing was practised: there was positive pressure ventilation, designed to prevent air-borne spread of infection from one room to another, and the staff wore theatre gowns and masks. Staphylococcus was the main concern during the first year, and commensal organisms in subsequent years. Four Kolff-Travenol twin coil artificial kidneys were acquired. The Kolff bath would be made up in the original AKU room and the machine wheeled to the RIU. The 1962-63 RIE annual report stated that 46 new patients were admitted to the RIU for dialysis.

In the Renal Unit in Edinburgh, there was an emphasis on the importance of minimising cross-infection. Such a policy was not adopted in all the dialysis units in UK. In the late 1990s the unit was brought into use again, and subsequently used to isolate MRSA-positive patients from other dialysis outpatients.

Reaction to haemodialysis for patients with acute renal failure

The Scotsman reported the opening of the first artificial kidney unit in Edinburgh (May, 1959), but there was no further press coverage on haemodialysis for renal failure, so the public was not widely aware of it.

In the early days most of the patients treated were young. During the 1970s, the severity of illness of patients treated for acute renal failure increased. There was no intensive care unit (ITU) at this time, and ventilation and cardiovascular monitoring had to be undertaken in the Renal Unit, with help from anaesthetists. The work of the Renal Unit increased steadily from 65 dialyses on 50 patients with ARF between the years of 1959 and 1960, to more than 800 patients treated by 1981. However much of the pressure came from the increasing numbers of patients with chronic renal failure coming forward for treatment, which put substantial pressures on the personal and financial resources of the Unit. Read more about dialysis for chronic renal failure and the later history of the Unit.