Usually the cause of vasculitis is unknown. Sometimes it occurs as an allergic reaction, for example, to medication. Vasculitis is not a hereditary disease and it does not run in families. Some types may be caused by infections, for instance with hepatitis viruses and some bacteria.

Cutaneous vasculitis causes a skin rash (see the picture above) and sometimes pain. Systemic vasculitis commonly causes general symptoms such as feeling unwell, weight loss, night sweats and joint pains. Sometimes it may come on very suddenly and dramatically, but it commonly comes on gradually over days and weeks.
Any organ may be affected by vasculitis. When it affects the kidney, blood and protein may appear in the urine, but this may only be shown by urine testing. Kidney failure does not produce many symptoms until a lot of damage has occurred. Disease in the lungs may cause breathlessness and a cough, and occasionally bleeding causes the patient to cough up blood. Weakness and numbness of the hands and feet may be caused by inflammation of tiny blood vessels supplying nerves. Abdominal pain and bleeding may be caused by vasculitis in the gut, and occasionally this may lead to severe bleeding or to bowel perforation. Vasculitis in the heart may result in symptoms similar to a heart attack, and in the brain it may cause confusion, symptoms of a stroke or fits.

How is vasculitis diagnosed?

When vasculitis comes on slowly it is almost inevitable that correct diagnosis is delayed, as its early symptoms closely resemble influenza or other infections or illnesses. Routine blood tests are also rarely very abnormal early on. Anaemia is common, and there may be signs that suggest infection or inflammation. In some types of severe vasculitis, ANCA tests (described below) may help, although they do not prove the diagnosis on their own. Examination of a sample from an affected part of the body under the microscope is often required to confirm the diagnosis. Kidney biopsies are particularly helpful if there are signs of kidney involvement. Special x-rays (angiograms) can sometimes diagnose vasculitis affecting large blood vessels. 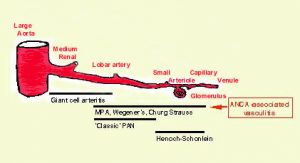 What types of vasculitis affect the kidney?

The kidney is particularly likely to be affected by small vessel vasculitis (SVV) which may involve the tiny blood vessels in the filtering units of the kidney. Inflammation of these filters is called glomerulonephritis. It is a common cause of a severe but treatable kidney disease called crescentic nephritis, because of the appearance under the microscope. This is also called rapidly progressive glomerulonephritis (RPGN) because of the speed with which it can cause kidney failure.
SVV affecting the kidney is usually caused by one of two types of vasculitis, microscopic polyangiitis (MPA) and Wegener’s disease. The appearances of these two diseases in the kidney are usually identical, but disease affecting other organs may help to tell them apart. ANCA may help with the diagnosis of SVV. Treatment of severe kidney disease is identical in either case.

Some types of vasculitis are described further in the table at the foot of this page.

Will I need dialysis?

In severe SVV, it is common for dialysis to be required soon after the diagnosis is made. However treatment can often heal severe kidney disease, so that dialysis is no longer required, even where some scarring and kidney damage remains.

Antibodies are molecules that are found in the blood stream. They are mainly there to fight infections by targeting foreign molecules. ANCA (anti-neutrophil cytoplasmic antibodies) stick to molecules found in white blood cells rather than to foreign material. These antibodies are often found in the blood of patients with small vessel vasculitis (SVV). It is not clear whether ANCA cause vasculitis, but they can be very helpful in the diagnosis. Unfortunately similar antibodies may be found in other diseases, and not all vasculitis may be ANCA positive, so the test is not 100% reliable as a way of making a diagnosis.

What are the treatments?

Severe types of systemic vasculitis often require powerful treatments to suppress the inflammation and the powerful immune response. Treatments may include Steroids, Cyclophosphamide, Azathioprine, Plasma exchange, and other drugs. If vasculitis is due to an infection, treatment for the infection is important.

The kidneys are most affected by the types of vasculitis that affect small blood vessels.

Acknowledgements:  The original author of this page was Gemma Browne. It was first published in April 2000. The date is was last modified is shown in the footer.