Jump down the page to Machines, or go to the separate page on Transplant facilities

1950s
Patients with renal failure were managed conservatively before dialysis was available on Ward 21 at the Royal Infirmary, the metabolic ward. It was a small ward with 12 beds and a small doctors’ room. It was looked after by Professor Dunlop, and later by Professor Robson. Most patients had endocrine or metabolic disorders, such as Addison’s disease, osteoporosis and osteomalacia. Patients with acute renal failure were put onto a low protein, low salt, low potassium and high calorie diet, with some success. More info

1959
The Artificial Kidney Unit (AKU) was opened in laboratory space a few doors away from ward 21. One patient could be dialysed at a time on the Kolff-Travenol machine provided. Since the late 1960s, more and more beds were used for renal patients and conditions that required renal biopsy. It was later used for patients with CRF. If there were more than 12 patients, they would board in the wards along the medical corridor. RIU (now called Ward 21A) was the renal HDU with 4 spaces for dialysis in glass cubicles, to prevent cross-infection especially against Staphylococcus infection. PD was performed in ward 21, and also in other wards.

1960s
More and more beds on Ward 21 were used for renal patients and conditions that required renal biopsy (first introduced to Edinburgh in 1956).

1962
The Renal Isolation Unit (RIU) was opened, formed from part of Ward 23, and opposite the entrance to Ward 21. It contained four beds for patients with acute renal failure, at which dialysis could be performed.

1966
Half of ward 21 was converted for the use of patients with chronic renal failure – three machines were installed. More info

1978
Plasma exchange became available for patients with circulating autoantibodies, such as Goodpasture’s disease and severe lupus erythematosus. It was a more complicated set up than haemofiltration and HD. The advantage of plasma exchange is that it allows the removal of protein.

1982
Ward 44 opened for CAPD training. The conversion of the ward to CAPD training ward was a joint effort by the RIE and patients. A plaque on the wall of the ward reads: “The successful outcome of a joint venture by the Lothian Health Board and the Continuous Ambulatory Peritoneal Dialysis Society in the creation of Edinburgh’s first training unit for patients requiring CAPD, December 1988.”

1993
Renal High Dependency Unit opened on Ward 43 in December, in place of Ward 21A.

1994
In May Wards 41 and 42 opened as the general nephrology wards. A plaque on the wall outside the Renal wards which commemorates the opening of the Renal wards reads: “The Renal Wards, opened by Dr John Baynham, 26/5/1994”. 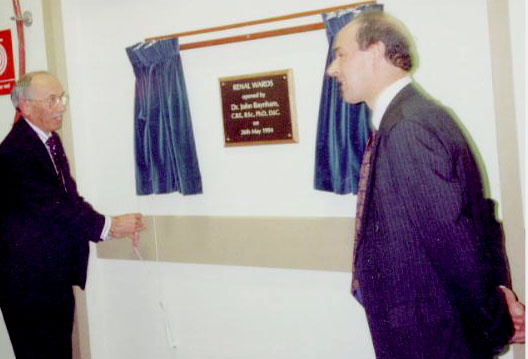 1995
Transplant Unit opened at the Royal Infirmary (transferring from WGH)

2001
There are 13-14 dialysis units in Scotland. The Glasgow renal units have extended their service to Falkirk. Dialysis is now available also at Inverness, Dundee, Dunfermline, Dumfries, Kilmarnock, and Borders General Hospital (satellite unit).

They are essentially extensions of hospital dialysis units but staffed by nurses only. Edinburgh used to have satellite units in Fife and the Borders, now Fife has its own nephrologists but the Borders unit has been supplemented by a unit at the Western General Hospital since the nephrology service associated with the Transplant Unit there moved to the Royal Infirmary.
Satellite units have several advantages. They are closer to some patients’ homes, they are smaller quieter units, and some patients find that “nicer”, as staff and patients can get to know each other. However, they are often not suitable for patients who are old, unfit or those who are anticipated to have difficult dialysis, as there is no on-site specialist medical support. 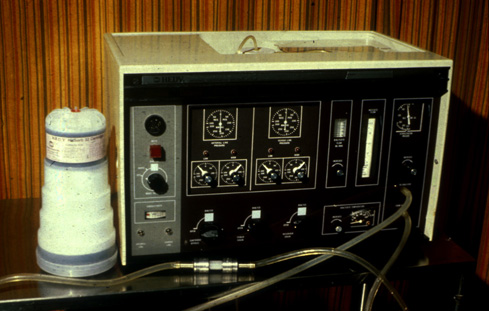