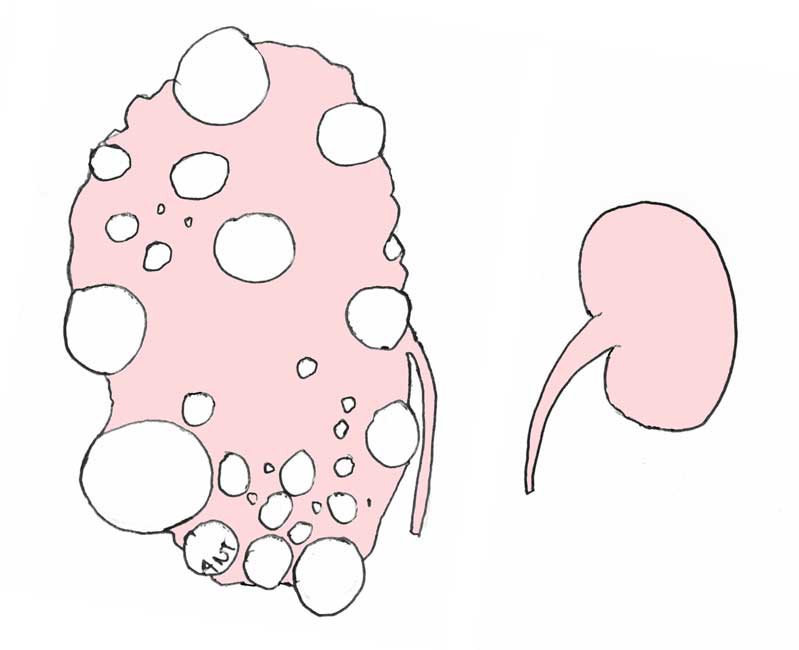 Polycystic kidney disease (PKD) is the commonest inherited disease causing end stage renal failure (ESRF), and accounts for 8-10% of patients on RRT programmes. The major variety is an autosomal dominant disorder (ADPKD) said to affect 80/100,000 of the population. The kidneys become slowly enlarged and contain many fluid-filled cysts. There may be hypertension, haematuria, abdominal discomfort, or no symptoms at all.

Only about 50% of individuals with PKD1 mutations progress to ESRF, and those with mutations in PKD2 tend to have milder disease with less and later renal failure.

Hypertension should be treated as it is going to be a lifelong problem, and cardiovascular events are much more common in patients with CKD. Patients with PKD do well on dialysis and after renal transplantation, but if kidney enlargement is massive, nephrectomy is sometimes required to make space for transplantation.

The ADH (Vasopressin V2)-receptor antagonist Tolvaptan has been shown to slow the rate of growth of cysts and of GFR loss in PKD. In countries where it is available, protocols to identify those at highest risk of ESRF are being used to target treatment.

The second most common inherited cause of kidney failure, most commonly X-linked and affecting young men. Autosomal recessive disease may also occur and is clinically indistinguishable. Caused by mutations in any of three tissue-specific basement membrane collagen genes. These collagens are an important part of glomerular basement membrane (GBM) and the cochlea. Their genes are COL4A5 (X chromosome), COL4A3 and COL4A4.

Typically affected individuals develop progressive haematuria, proteinuria, then renal failure and deafness in their teens, and ESRF in their twenties. Carriers often have haematuria and the renal biopsy finding of a thin GBM.  A proportion of carriers may develop serious renal disease in later life. In some families with COL4A3 or COL4A4 mutations this has seemed to happen often enough to trigger an ‘autosomal dominant’ (but with incomplete penetrance) label. ACE inhibitors appear to have an important effect on delaying the progression of renal disease in Alport Syndrome.

There are scores or more other inherited renal disorders, but the largest group comprises conditions in which renal development is incomplete or imperfect. Unilateral renal agenesis (having a single normal kidney) is quite common and asymptomatic. If the kidney is normal, it will hypertrophy as you grow and provide adequate renal function.  If it’s damaged, it may not. Renal hypoplasia overlaps with other developmental or structural disorders, notably reflux nephropathy.