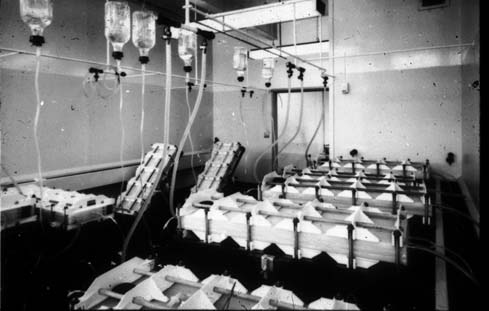 Kiil dialysers being prepared for the day’s patients

The beginning of haemodialysis for patients with chronic renal failure

At the International Congress of Nephrology in Prague in 1963, the first successes in dialysis of patients with chronic renal failure were reported. Subsequently in Edinburgh, after the introduction of improved methods of vascular access, a few patients with CRF were dialysed alongside patients with ARF using the Kolff-Travenol twin coil dialysers. Contemporary account from a patient.

The Artificial Kidney Unit (AKU) was used to dialyse patients with chronic renal failure. It provided out-patient dialysis before the new MRU building was opened in 1969. “Refrigerated machines” with Kiil board dialysers were used. The dialysis bath was made in the large refrigerated tank of the dialysis machine. It was thought that refrigeration would reduce bacterial growth in the dialysate during dialysis, which might take up to 9 hours. Kiil board dialysers are in layers like sandwiches: a layer of plastic, 2 layers of cellophane (the dialysis membrane), another layer of plastic, another 2 layers of cellophane and a further layer of plastic. They were clamped together tightly. It was often called the “Kiil sandwich”, and it required a fair amount of skill and experience to make. These dialysers were cleaned and lined by technicians, who were exposed to risk of infection.

The dialysate was made up in the laboratory next to the AKU. Before late 1980s, acetate was used as a buffer as the technology to use bicarbonate in these machines was not yet developed (bicarbonate would precipitate out the calcium in the dialysate). Acetate was converted to bicarbonate in the body. However, acetate has a number of haemodynamic effects. Several patients who are small in size with smaller muscle bulk collapsed during dialysis due to hypotensive shock. Other side effects included cramps and nausea.

In 1966, 3 proportional pumping machines were installed in ward 21. Three CRF patients were dialysed in one half of the ward. The machines produced dialysis fluid at a physiological concentration. Concentrated dialysis solution was mechanically diluted with water from a mains supply. Lactate was used as the buffer. These machines were not as labour intensive as the Kolff-Travenol twin coil dialysers: they did not require the changing of the dialysate bath every 2 hours, and there were more safety features, so one-to-one nursing was not required.

Ward 21 was a 12-bedded ward, which was part of the metabolic unit. More and more patients with renal problems were admitted to this ward, so ward 21 was gradually “evolved” from a metabolic ward to a general nephrology ward. Dialysis for CRF patients also continued at the AKU. Further development of HD for CRF patients was limited by the shortage of dialysis machines and space until the opening of the MRU in 1969.

The Scottish Home and Health Department reported at the end of 1966 that there were ten dialysis machines in Scotland (five in the RIE, three in Glasgow and two in Dundee) (Catford EF, 1984). There were still too few dialysis machines to meet the increasing demand. It was decided that a new purpose-built unit should be built to meet this demand and for “maintaining the Infirmary (RIE)’s position as one of the world’s pioneers in the treatment of kidney diseases”, as stated in one of the press reports at the time (Catford EF, 1984). The increase in the number of patients with end stage renal failure requiring dialysis also led to the piloting of a home haemodialysis programme in 1967.

Dr S.G.M. Francis, the Medical Superintendent at the time, allowed his house, the Meadow House, to be demolished in 1966 to make room for the new MRU building, as it was considered unnecessary for the medical superintendent to live within the hospital with the improved means of communication (Lambie AT, 1990). The site was close to the RIU and AKU. The new MRU building was designed by Robert Matthew, Johnson Marshall & Partners (Catford EF, 1984). The staff involved in the planning included Sir John Crofton, then Dean, Professor James Robson, Dr S Francis and Dr John Bowie, Senior bacteriologist, who gave advice for infection prevention and control.

The new MRU building was built by the University of Edinburgh and the RIE as a joint effort. It cost about Â£250,000 for the building and equipment, where 70% was provided by the health service and 30% by the university (Catford EF, 1984). In early 1969, it was completed. Staff offices, laboratories and an academic area for the University of Edinburgh Department of Medicine were situated on the lower level. All the biochemical tests on blood and urine were performed in the new MRU laboratories. Urine chemistry was particularly closely monitored. The upper level provided facilities for 10 dialysis stations. Because it was not clear whether the new proportioning machines would work, a large dialysate tank was installed in the roof . This building provided the necessary space for dialysis and for university laboratories. When in-patient beds were needed for patients on chronic dialysis, they were admitted to wards 21, 23, 24, 26 and 27.

The university academic side was very active in the medical renal unit. The academics included a professor (Professor Robson), a senior lecturer (Dr Anne Lambie), a lecturer and research fellows. The new facilities gave a further boost to the ongoing research on renal physiology and disease.

Dylade, a British company, made the B-machines that were used with Kiil board dialyser. It took the technicians a whole morning to clean and line these Kiil boards with cellophane. Patients would arrive at the MRU at about 4 pm, and dialysis would last all night (12-14 hours). There was only one shift each day (as opposed to three shifts daily currently). Each patient was dialysed twice a week. The SHO went round the unit and cannulated all the fistulas with the nurses’ assistance. In 1972, D-machines were introduced and they were used with hollow fibre dialysers or flat plate disposable dialysers. Hollow fibre dialysers are artificial kidneys where numerous bundles of dialysis tubing are contained within a plastic cylinder. These bore a certain resemblance to the first artificial kidney made by Abel and colleagues in 1913. The hollow fibre dialysers were introduced because of the hepatitis outbreak. Air embolism detectors were only introduced in 1972, and before then, there were fatalities from air embolism. Nurses used to go round the ward at night shining torches to check for blood leakage.

The MRU building was built as a definitive unit. However, it was not built with materials that would last many years. The building has suffered a lot in recent years especially on the outside. Asbestos has been removed from the building. From the author’s own experience, liquid from the floor above has landed on one’s head while one was performing laboratory experiments.

By 1969, there were only two dialysis units in Scotland for patients with chronic renal failure. These were at Glasgow Western Infirmary and Royal Infirmary of Edinburgh. Another unit at the Glasgow Royal Infirmary opened about a year later. The Edinburgh unit covered south to the Borders, north to River Tay (whole of Fife), west to Lanarkshire (the Forth Valley that includes Stirling and Falkirk was served by both Edinburgh and Glasgow), and east to the coast.

Funding for dialysis came from the budget of the Royal Infirmary. However this allowed only for basic provision. Gifts of more than Â£200,000 had been received over the years to help with purchasing equipment and research, reflecting the public appreciation of the work the unit (Catford EF, 1984). The Midway Trust was set up by the wife of a dialysis patient . The charity provided dialysis patients with things that the NHS would not buy, such as furniture and holiday trips. 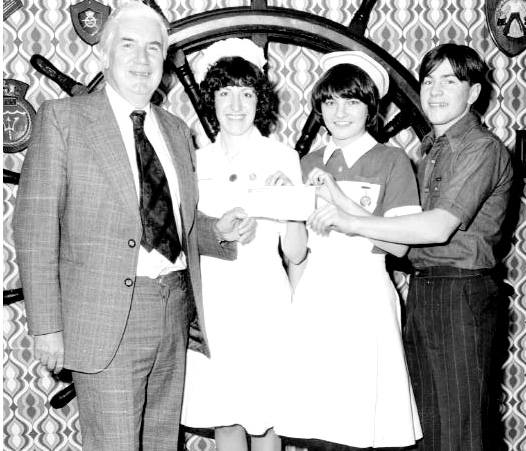 Difficulties and reactions to haemodialysis for patients with chronic renal failure

In the first few years before the MRU building opened, there were no fail-safe devices and blood volume control devices in the dialysis machines. Patients initially felt unwell temporarily after dialysis due to the big changes in the extra-cellular volume and the body chemistry. The problem was resolved by more frequent and shorter dialysis sessions.

As Professor Dunlop used to say, “There’s no therapeutic rose without a thorn.” Most treatment has side effects. Dialysis was a good form of treatment but not without problems. As dialysis was still not completely established and possible complications were not clear, together with the increasing demand on dialysis and the short supply of dialysis machines, doctors had to act as “gatekeepers” to choose which patients should receive treatment. Patients who were classified as “medically doubtful” were turned down for dialysis. Good subjects for dialysis were the relatively young and fit, since it was a relatively new procedure and complications were not clear, and haemodialysis is an “insult” to the circulatory system. Very few older patients were referred. Referral of older patients began in the 1980s. The UK lagged behind Europe in treating older people (partly because the UK could not meet demand, partly because doctors did not think it would benefit older patients). Some of the patients turned down complained to the press and to their MPs, and dialysis for CRF received a fair amount of publicity, as a result.

Major medical problems experienced in Edinburgh included a serious outbreak of hepatitis B in 1969, and the development of aluminium toxicity caused by high aluminium content of the water used to make dialysate in 1976.

Go to significant events in the history of the dialysis unit

Outcome of haemodialysis for patients with chronic renal failure

Many of the patients were able to lead near-normal lives in between dialysis sessions. Most of them were able to work or enjoy social gatherings. Dialysis, originally thought by some as having no place in British medicine, has become a procedure that not only saved lives but also enabled most patients to have a better quality of life.

Before 1972, dialysis sessions lasted for about 12 hours (e.g. 3 pm to 6 am). There were 2 shifts per day. When disposable dialysers were introduced between 1972-73, length of dialysis reduced to about 6 hours. In the 1980s, it lasted 7-8 hours, and patients were dialysed twice a week. The unit operated 3 shifts per day (8am, 3pm, 9pm). In 1993 4 beds were replaced with 6 chairs in the dialysis unit, together with the knocking down of the wall of the utility room and the sister’s room in 1995, more space was made available. 14-15 patients were accommodated each time. The unit operated 3 shifts a day.

Haemodialysis at the RIE now

Print
← Haemodialysis in Edinburgh I ← Vascular access for patients on haemodialysis
This site uses cookies: Find out more.