Renal anaemia is a normochromic normocytic anaemia that increases in severity as renal function declines. There are a number of explanations for anaemia in patients with renal failure, but deficiency of erythropoietin (EPO) is usually dominant when patients are nearing end-stage. EPO is a hormone produced by the kidneys in response to an anaemic hypoxic stimulus; it acts to correct anaemia by stimulating red cell production in the bone marrow. Anaemia due to EPO deficiency can occur with any stage of CKD, but does not usually develop until eGFR is less than 30ml/min/1.73m2  (<45/min/1.73m2 in patients with diabetes) and worsens with declining renal function.1

EPO replacement therapy was developed in the 1980’s, and its use has now become widespread. It has revolutionised the management of renal anaemia, which was previously dependent on repeated blood transfusions and use of androgenic steroids. The majority of patients who require renal replacement therapy will require EPO replacement; the one notable exception to this rule is patients with polycystic kidney disease, who often do not develop EPO deficiency.

However, patients with renal disease are susceptible to anaemia for many reasons, not only EPO deficiency. 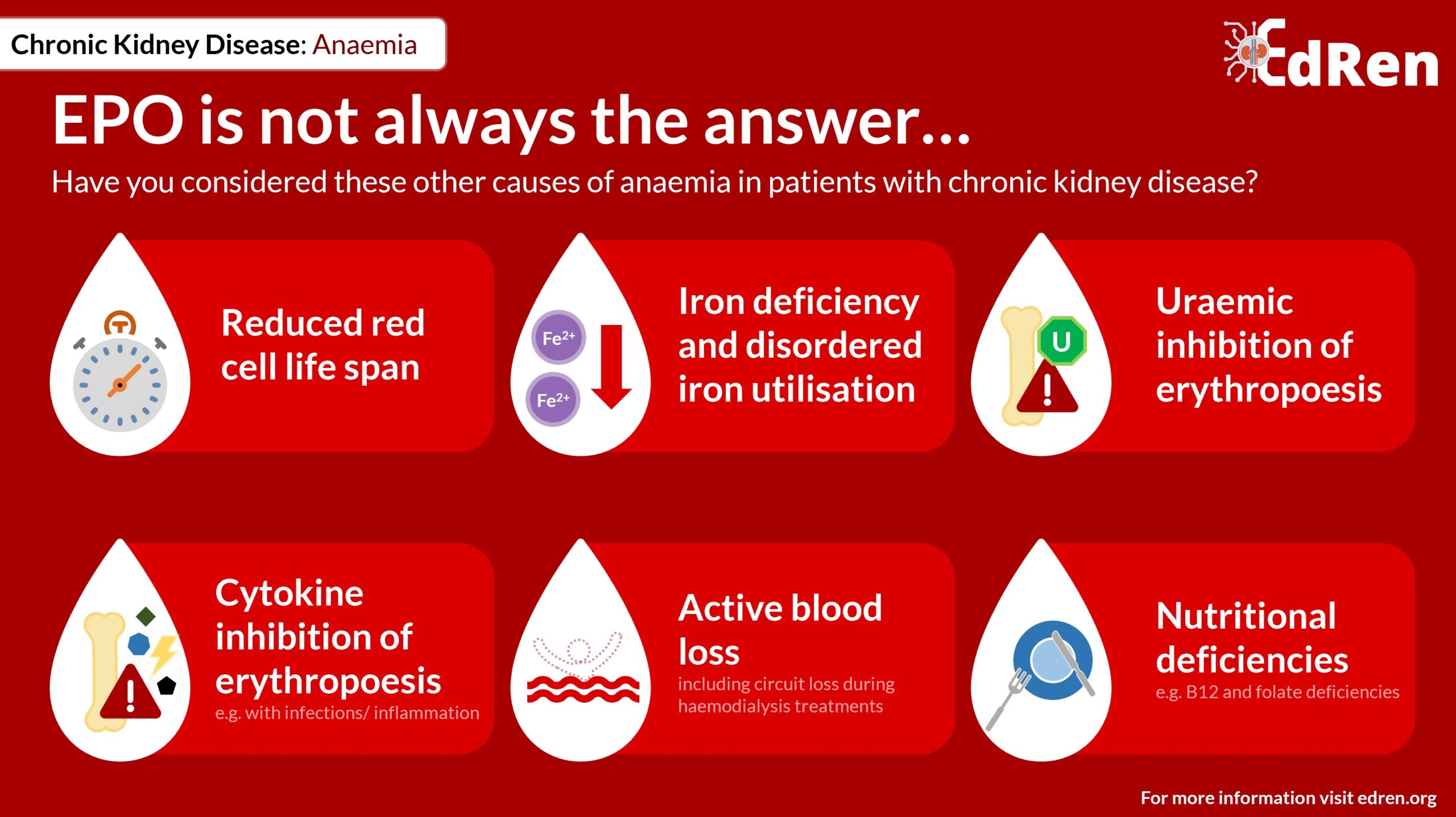 Other causes of anaemia in patients with renal failure include:

Without effective treatments anaemia can be very severe and an association exists between low haemoglobin and risk of morbidity and mortality ESRF2. Improving haemoglobin by use of erythropoiesis-stimulating agents (ESAs) results in improvements in exercise tolerance, quality of life, cognitive function, nutrition, and cardiac status (including reduce left ventricular hypertrophy and dilatation).3-4  However, whilst you might assume that restoring haemoglobin to within a physiological range would be most beneficial, studies have not supported this practice due to an increased risk of cardiovascular events.5-6 The exact mechanism of this is unclear, and there is some suggestion that it may be the high doses of EPO used to achieve a normal haemoglobin, rather than the absolute haemoglobin in itself which may confer the increased risks.7 However, given these concerns, recommended target haemoglobin for patients receiving ESAs is therefore low-normal, usually between 100 and 120g/L.8

Based on the results of the above investigations, a decision can me made as to whether or not anaemia is related purely to EPO deficiency, or whether there are additional contributory factors which require alternative treatment. Initiation of ESA replacement therapy is done under the supervision of a consultant nephrologist.

<< Back to Anaemia in Renal Disease