Print
Microangiopathic Haemolytic anaemia blood films (diagrammatic): normal on left, and showing red cell fragments and reduced platelets on the right.  See foot of the page for an illustration of how this occurs.

These diseases are associated with platelet thromboses in small blood vessels and consequent thrombocytopaenia. Damage to endothelium is a common factor. Other coagulation tests are not usually abnormal. Blood films show red cell fragments thought to be a consequence of damage in small vessels (microangiopathic haemolytic anaemia, MAHA; see diagram to the left) There is considerable overlap, but two major clinical patterns are recognised.

Myeloma and B cell dyscrasias (dysproteinaemias) – may affect the kidney in several ways:

Myeloma is a B cell neoplasm in which there is usually overproduction of a monoclonal immunoglobulin. It causes lytic bone deposits and hypercalcaemia, bone marrow suppression, and if free light chains are overproduced they can precipitate in tubules and be toxic to tubular cells (cast nephropathy). Renal failure may be the first manifestation. Characteristically it occurs after exposure to radiological contrast media, but more often renal impairment is identified during investigation of non-specific symptoms. As in other tubulointerstitial disorders, clinical findings are minimal. Urine analysis by immunoelectrophoresis or other tests for â€˜Bence Jonesâ€™ protein are required.

Amyloidosis is caused by highly structured, fibrillar aggregation of certain proteins, either:

This leads to deposition in various tissues according to the protein, but the kidney is affected by the common types.  The deposits take up the histological staining reagent Congo Red, with a characteristic apple-green colour under polarised light.  Three common types of amyloid in renal patients: 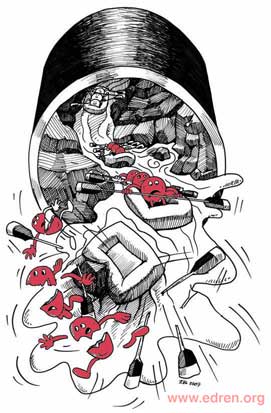